Traditional Endzone Camera Systems have been a part of the high school field sports coaching formula for some time now. Sports like football and soccer rely on some sort of telescoping tripod tower system in order to get game footage at an elevated angle on the field. These traditional end zone camera systems typically have a large cable, monitor viewing screen, camera remote, and some sort of robotic mechanism to rotate and tilt the camera.

However, at Sport Scope we've introduced a new sports video technology that will make the traditional endzone systems look archaic. The Sport Scope Smart Endzone Camera is a superior wireless system that reinvents the functionality of how an endzone camera works. This article will explore how a Smart Endzone Camera exceeds old-fashioned, traditional endzone cameras in terms of features, ease of use, performance, and more.

The Smart Endzone Camera System is controlled wirelessly from an iPad. From here you get the camera's video feed, zoom/record functionality, and the pan and tilt functionality. And you get to operate these controls from the comfort of the Pressbox or on the Sideline! No more standing/sitting in the endzone. With our powerful 3-point network, we give you hotspots in the pressbox and sideline where numerous iPads can be connected. This is impossible with traditional endzone camera systems.

In addition to Endzone Cameras, Sideline Instant Replay has also become a necessary tool for coaches to improve on their game. With this technology you can review the play on a tablet as soon as it's over. Sport Scope introduced the EDGE Replay in 2016 and changed the way coaches did sideline instant replay.

The Smart Endzone Camera isn't just a wirelessly controlled endzone camera. Our EDGE Replay technology has been integrated into the Smart Camera so that recording with the Smart Camera also gives you replay at the same time! Simply have your Smart Camera operator connect and record the game from his iPad. Then the coaches can connect to the private Sport Scope wireless network with their iPads and review the plays as they're being recorded by the operator. It's that simple. Not only does this reduce the need for added equipment, but it also reduces your need for additional film volunteers.

The Smart Endzone Camera eliminates the need for big cable bundles or long HDMI cords, monitor screens, joystick boxes or pulley systems, and delicated camera remotes. All of the pieces and parts you might have struggled with in the past are no longer necessary. Now all you need to do is assemble the Smart Camera head and then set up the network equipment in the Endzone, Sideline, and Pressbox. That's it! And because almost all the equipment is pre-mounted into their own dedicated hardcases, set up is an incredibly simple plug-and-play process. 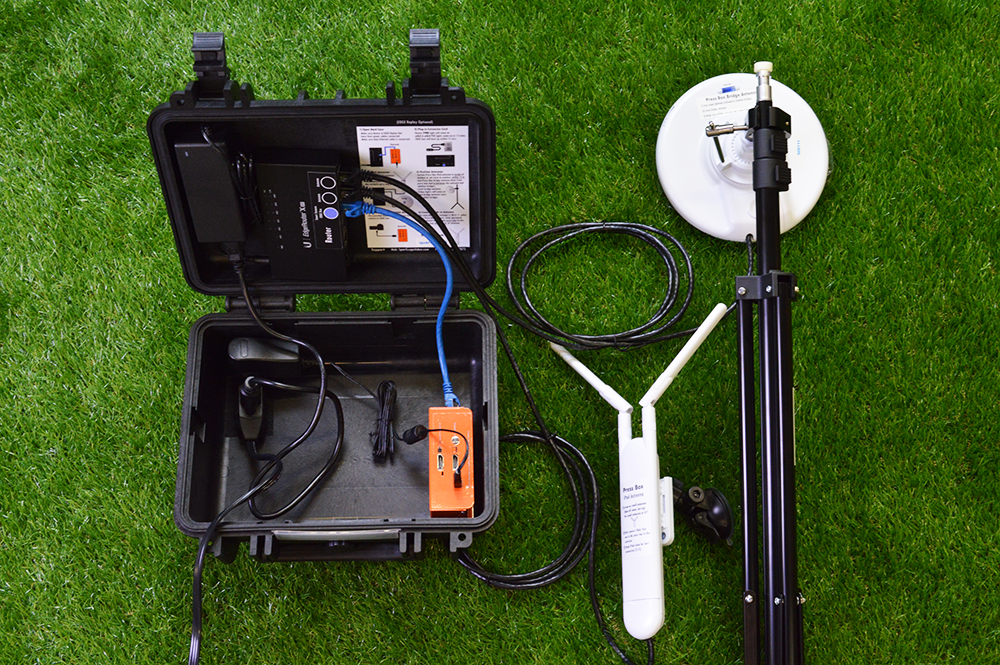 Ability to Keep Up with Fast Plays

The Sport Scope Smart Endzone Camera System was designed with touch screens in mind. Our hardware and software was made together so that each feeds off the other. We use pan and tilt motors that work elegantly with the iPad controls. The more you move your thumb on the iPad touch screen, the more you can increase or decrease the speed of the panning and tilting. This makes for greatly improved precision. Something that was only previously possible with manual by-hand pan and tilt end zone camera systems. Now you can follow fast plays that traditional joystick-controlled endzone cameras were incapable of following.

The Smart Endzone Camera System makes following the play a more interactive experience. The controls have a similar feel to an easy-to-play video game and you'll love trying to perfect your videography skills with the unmatched precision.

The Smart Endzone Camera is the future of filming field sports. But not just because it's a wireless 2-in-1 endzone and replay system. This technology also opens you up to future possibilities and features currently in the works. At Sport Scope, we've already introduced a new DVR feature that allows teams to record the entire game and instantly jump back to a spot in the recording for review. Possibilities like this will keep coming while traditional endzone cameras will be left in the dust.