In the past, an End Zone Camera and a Sideline Instant Replay system were technology that had to be kept separate. Today, the two are one and the same. The new Sport Scope Smart Endzone Camera is a wireless end zone camera system AND a sideline instant replay system at the same time!

Not only are the end zone camera controls more user friendly, but there's less equipment and your replay is automatically sent to all connected iPads. With this in mind, if you're a user of another replay system, you might be wondering why you should even continue paying the high price tag. This blog post will explore what you'll be facing if you stay with another replay system and the possibilities you'll have with the Sport Scope Smart Endzone Camera...


Why Deal with Multiple Networks?

With the Smart Camera's built in EDGE Replay service, you only need to be concerned with one wireless network to both control your end zone camera and to get all your instant replay clips on your iPads. Once you're using a wireless endzone camera like the Sport Scope Smart Camera, it will become confusing if you're required to connect some iPads to the endzone camera network and other iPads to your other Sideline Replay network. This makes for a more complicated pre-game tech set-up.

And if you're working the Smart Camera in conjunction with some 2-angle systems, you could have up to 3 networks bouncing off each other in the stadium. That's not good for keeping a good connection. Wireless 2-in-1 Endzone-Replay control is the future. So why make it complicated with additional separate wireless networks for your endzone camera and your replay system. It's time to consolidate and make everything simple.

The Sport Scope Smart Endzone Camera is essentially 3 parts: Pan/Tilt Head, Router, and Antenna. And if you need a second angle for the EDGE Replay System then you just need to add an EDGE box and another router and antenna to the Press Box. This give you full control of your End Zone Camera Tower and both Sideline Replay Angles. If you're still trying to use another replay then now you have the same Smart Endzone Camera equipment, but you also have to set up all of the other Sideline equipment in the Pressbox AND the Endzone.

Additionally, you'll have to run a big 30' HDMI cable down the tower to even get it running. Why struggle with the additional cables, carrying cases and pieces of unnecessary equipment? 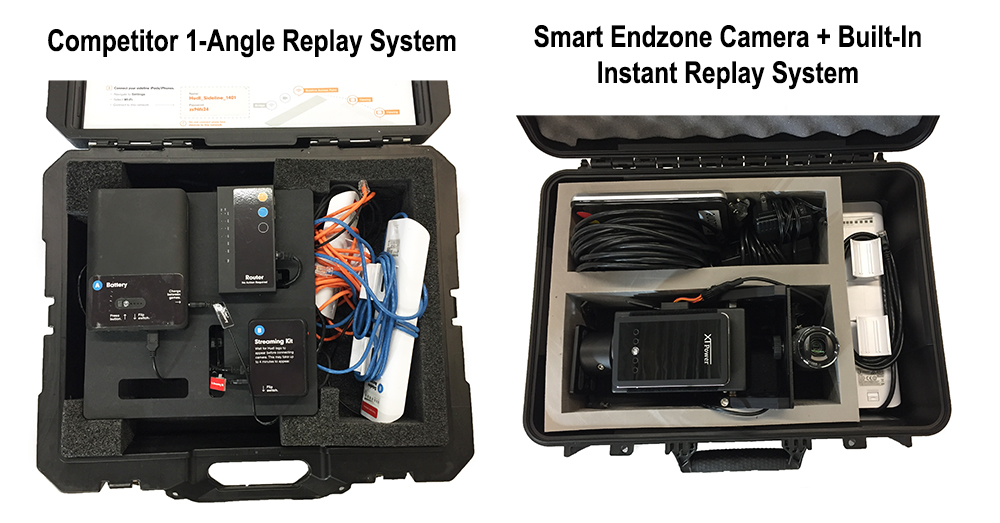 Why Not Use a Live View on ALL iPads?

In case you didn't know, some Sideline Replay systems are only capable of live streaming your cameras' views to ONE iPad. And the iPad that receives the live stream MUST be the iPad that does the recording. Typically this is not the coach's iPad, thus making this Sideline Replay live stream capability rather meaningless. On the contrary, the Sport Scope Smart Endzone Camera allows ALL connected iPads to have a "Live View."

A Live View isn't the same as a live stream because it's not the same high definition footage coming from the cameras. Rather, the Live View is a compressed stream so that (1) we keep your wireless network super strong and (2) all the iPads have the ability to view the game live without interfering with each other. This is a major game changer for coaches who'd like to see the elevated views right as the play is happening

And that's not the only benefit to the Live View. As coaches know, from time to time your headset system may go down. In the past, if this happened the coaches were essentially running blind due to the inability to receive communication on what was happening from the Press Box booth view. Now with the Smart Camera Live View the coach on the sideline simply needs to look down at his iPad in order to not miss any information about what's happening in the play from that elevated view. Another win for the Smart Camera's range of use and simplicity. 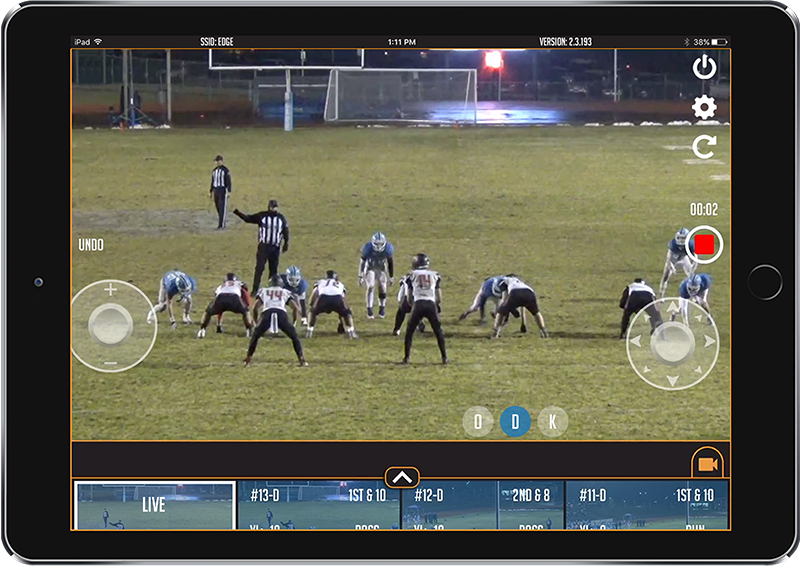