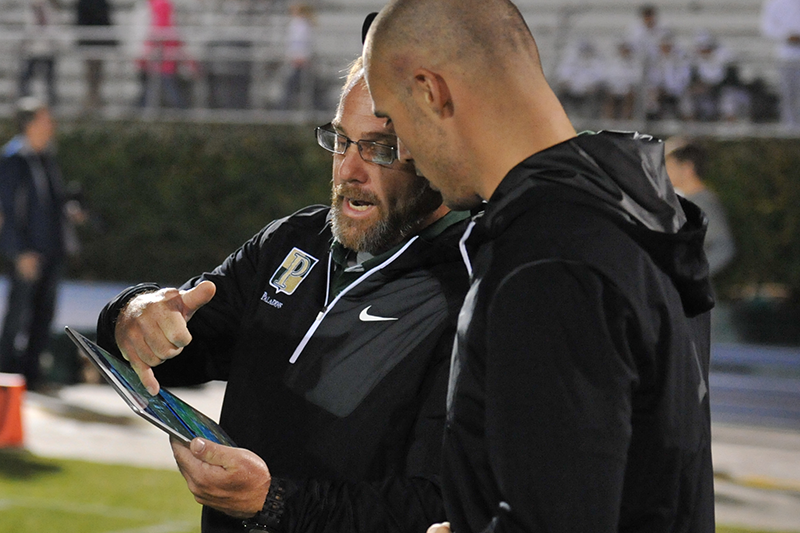 The biggest competition for Sideline Instant Replay right now is between the EDGE Replay and the Hudl Sideline. These two systems are both being marketed as providers of sideline instant replay for field sports such as football. Both systems have undergone changes since their initial launch and, therefore, our reviews between the two systems need updated. In this blog post we'll be examining the differences between the EDGE Replay and the Hudl Sideline for the 2019 season and explaining why the EDGE outplays the Sideline across the board . . .

For this season the EDGE Replay and the Hudl Sideline will be using very different network arrangements than what the systems began with. The big difference, however, is that Hudl will be keeping with a 2-point network while EDGE Replay has upgraded to a 3-point network, and this is significant for several reasons.

The Hudl Sideline has two locations for their networking antenna equipment. One in the Pressbox booth and one in the End Zone. The system creates an access point from both locations. One beam of WiFi is sent to your iPads on the Sideline from the Endzone. Another WiFi zone is created in the Pressbox for any iPads that need to connect from there.

On the other hand, EDGE Replay has 3 locations, and the difference is very important. Rather than send a WiFi beam all the way from the Endzone, we create the WiFi access point right on the Sideline where the coaches' iPads are going to be. We also create the same WiFi zone in the Pressbox as well. And what's even more important is that we are using some of the most advanced antennas on the market to transmit high speed wireless data to each WiFi zone.

Meanwhile, the Hudl Sideline relies on outdated technology and sending a signal from the Endzone, risking cross-interference, across the field to the coaches' iPads on the sideline. Instant replay for a field sport like football is demanding so having a 3-point network is becoming an industry standard. Going without this new network will leave you at a technological deficit during your most important games.

Perhaps even more important than a Replay System's wireless network is its recording device. The Hudl Sideline uses a third party device to stream game footage wirelessly to a master iPad. At this point the master iPad is forced to convert the footage for replay and then has to send the downloads back through the wireless network so that it can be relayed to all the coaches' iPads for download.

Long story short: the Hudl Sideline is creating a makeshift solution that's more convulated than it needs to be. They do this to save money because the third party streaming device is cheaper than a dedicated device for replay. As a result you get slow download speeds and an unreliable network.

EDGE Replay, on the other hand, uses a recording device built from the ground up for instant replay. Rather than rely on a third party device or force an iPad to handle the download computation, our dedicated device captures your game footage from the camera, sends out a live stream, and distributes the downloads for the replay to all connected iPads from one source. No more back and forth data, no workarounds or third party hardware, just streamlined, seamless, and FAST downloads.

This season EDGE Replay is pre-mounting all of our hardware in protective hardcases. We divide the hardware into 3 cases and inside each are instructions for that particular station. The Hudl Sideline also pre-installs their hardware, but the number of parts that are sandwiched in one case through multiple layers is much more complicated and messy. As the image below shows, you can see how simple our Pressbox kit is. Each kit of our 3-point network is this simple. The Hudl Sideline won't give you a case laid out this bare. Their system requires more parts and cables and for this reason the cases are stuffed with more assembly to deal with.

When it comes to software, the EDGE Replay, using the Sport Scope app, has the best advantages and most features. Like the Hudl Sideline you can tag Offense, Defense, and Kicking (ODK) on plays from the main record screen, but unlike Hudl you can also fully tag each play by down, distance, and much more from the same app. With Hudl Sideline if you want to also tag by down, distance, etc. then you're forced to use a separate app. This is a problem because if you make a mistake and tag the wrong play, then when you upload your data after the game you could have a lot of work ahead of you sorting through the right tags with the right plays. It's impossible to have this problem with the Sport Scope app. All tags go with the correct play because all tagging is done in one unified app. It's more simplicity and less confusion.

The EDGE Replay uses this tagged data to create an in-game engine in the Sport Scope App. This gives you stats and allows you to predict your opponent's tendencies based on passing, rushing, etc. This is a huge advantage because you can use the info to predict the likelihood that your opponent is going to pass or run based on the down or position on the field.

Furthermore, EDGE Replay can quickly switch between your Endzone and Pressbox angles by selecting the Picture-in-Picture window on the screen. With Hudl Sideline you can only watch one view at a time. To see another angle you have to open a new menu, find the play, and then download that angle in order to watch it. That's a lot of steps and time just to watch the same play from another angle.

The Hudl Sideline has a seeming advantage in a lower first-year price for all package tiers. However, the major disadvantage for Hudl is in the long term cost. Below are the total cost differences after 5 years between EDGE Replay’s two and one angle systems ($2,499 and $1,499) and Hudl Sideline’s equivalent packages ($1500 and $900):

As can be seen, despite the EDGE Replay's higher initial price point, it’s long term pricing is of a considerably greater value.

Because our Sport Scope app and our network works for both EDGE Replay and our Wireless Endzone Camera technology, upgrading to the Smart Endzone Camera after you already own EDGE Replay becomes a simple, seamless process. This system gives you the ability to control the Endzone Camera from your iPad and record your replays of the game at the same time! You cannot integrate this capability with the Hudl Sideline.

The 2019 EDGE Replay will change how you coach! Now with improved networking and a new plug-and-play setup getting sideline replay is more intuitive and more reliable than ever. Call (888) 335-7875 to exchange your Hudl Sideline or ask about EDGE Replay!