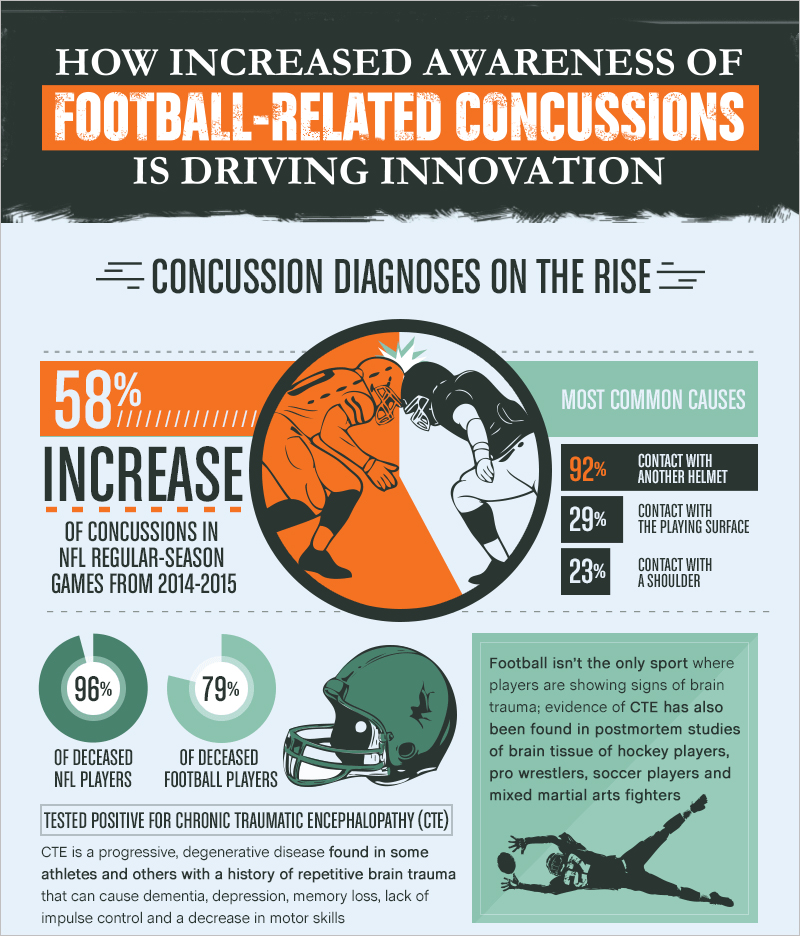 Recently the Online Masters in Coaching program at Ohio University created a revelatory infographic based on well-researched statistical data of football concussions. The title of the infographic is: How Increased Awareness of Football-Related Concussion is Driving Innovation. Please follow the link HERE to check out their work now!

To be stated lightly, the football and sports-related concussion diagnosis data is staggering. According to Ohio University’s Online Masters in Coaching program, the NFL incurred a whopping 58% increase in the number of concussions in regular season games from 2014 to 2015. The vast majority of these diagnoses comes from direct helmet-to-helmet contact.

These injuries have long-lasting and often deadly effects. The Online Masters in Coaching of Ohio University found that 96% of deceased NFL players have tested positive for Chronic Traumatic Encephalopathy (CTE), which is a progressive degenerative disease often found in individuals who have experienced brain trauma, including concussions.

The rise of reported incidents and the seriousness of concussion diagnoses has prompted a number of organizations to fund technological innovations committed to preventing future sports-related head injuries. The NFL, General Electric, and Under Armor are just a few in collaboration seeking the development of technology to detect mild traumatic brain injuries and improve brain protection.

The funding provided by these organizations has fueled the production of new technologies from the U.S. Army, the University of Washington, and a company located in Dearborn, MI called Viconic Sporting.

The US Army’s research laboratory is developing a material intended to tether from the player’s lower helmet bars to his chest. This will minimize head snapping during high-speed collisions, which is a common cause of concussions, yet still allows for voluntary head movement during the play.

University of Washington has partnered with Viconic to create the Zero1 helmet. This unique helmet is equipped with shock absorbing structures so as to address angular and rotational acceleration rather than just linear forces, a major problem that current helmets have not solved and are repeated contributors to concussions.

Viconic has also developed a synthetic surface to be placed underneath the football field turf to reduce impact. Made from highly recoverable thermoplastic, the mat can absorb significantly more energy than traditional foam materials.

Not only are companies creating preventative measures to combat concussions, but others, such as BrainScope Company, Inc., are developing new technologies to detect signs of a concussion in an individual’s brain waves. The Ahead 300, which is a hand-held device specifically designed to detect abnormalities in brain signals associated with head injuries, is one such technology. Early detection of brain injuries is vital to athlete health, safety, and treatment.

Sport Scope, as the developer of the EDGE Instant Replay System, is another innovator interested in the early detection of head-related sports injuries, such as concussions. We already have a Division I Mountain West Conference college team trialing the EDGE Replay with their medical staff in order to play back football hits and analyze the point of contact from a number of camera angles. This helps the staff to better determine what kind impact was had and make determinations on whether the athlete involved should be screened and how.

EDGE Replay was designed to meet a variety of use cases. Not only can sports medical practitioners use instant replay to analyze impacts in contact sports, but coaches can use the instant replay feedback to make quick, important decisions on how to orchestrate their next play. EDGE is especially useful to football teams, and was built with the coach in mind. If you’d like to learn more about EDGE, click HERE or email us at info@sportscopevideo.com or call (888) 335-7875 today!