Why a 3-Point Sideline Replay Network is More Reliable 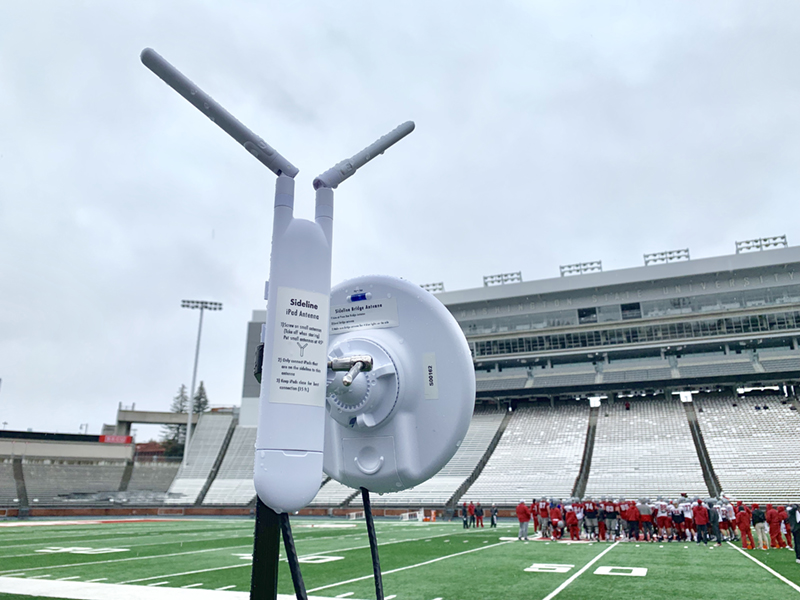 Sport Scope is revolutionizing networking technology to make our Wireless Smart Camera and EDGE Sideline Replay better than ever. We employ a 3-point network to ensure that you get the fastest, strongest experience controlling our Endzone Camera and Sideline Instant Replay. This user-friendly network provides coaches with optimum connectivity, efficiency, and reliability to ensure that the technology does its job. This blog post will detail the benefits of using an endzone camera system with a 3-point network.

Our latest 3-point wireless network is significantly stronger and faster thanks to its improved design and technology. Sending data across the field is now amplified with new, highly advanced Bridge antennas. iPads no longer need to depend on an antenna transmitter on the other side of the stadium to connect to their sideline replay. Instead, they can simply connect to one of the two hotspots that they are closest to, pressbox or sideline. Sport Scope’s programming ensures a rock solid WiFi connection as long as the iPads are within a given hotspot range. These connectivity factors contribute to the strength of the Sport Scope and EDGE sideline replay network that is unrivaled in the industry.

While the 3-point network includes more parts to set up, the procedure is actually much easier than our previous network. For example, there is no need to connect to a router in the endzone. Our EDGE replay and Smart Endzone Camera systems each include a simple power injector to connect with the new Bridge antenna. The press box and sideline network stations function the same, both merely requiring a router, Bridge antenna, and iPad antenna. The Bridge antenna also features connectivity bars and a level to check that they are appropriately angled and connected. This ensures that your sideline replay and 3-point network are set up correctly for effective use.

Having designated WiFi hotspots for iPads to connect to in the press box and sideline is an important aspect this sideline replay 3-point wireless network. Previously, all iPads in the network had to share connectivity with a single antenna in the press box. This was not nearly as efficient as our enhanced system which uses separate WiFi signals. With this technology, each station acts as an access point to one unified network that allows everyone to see the same footage and get replays of the game all at the same time.

Our advanced antennas allow us to make your network more reliable than ever. In the past, if a coach with a connected iPad were to go out of range, this could negatively affect connectivity for everyone else on the network. But now with the new-and-improved iPad antennas we can prevent this issue. Any iPad that leaves the range gets kicked off the network, but no other iPads will have performance compromised. This way, all other coaches can keep filming the game and using sideline instant replay without losing the signal.

You can have access to all of these impressive features of the Smart End Zone Camera for an incredible price starting at only $5,599. There are a number of other non-wireless endzone camera systems on the market in this price range that don’t include built-in Sideline Replay. Once again, your annual software fee for the EDGE Replay service doesn't start until the next year and is only $499. And you can easily add a second replay view at any time to suit your specific filming needs. This all-encompassing system provides coaches with everything they need for exceptional sports video technology, with a value that is unmatched.