Continuing with our Sport Scope Blog product comparison theme, today we'll be investigating the differences between the EDGE Replay and the Hudl Sideline. We’ll go into the pros and cons of each system and tell you why one has an advantage whereas the other does not. (For the sake of simplicity, we will primarily discuss the difference between the EDGE Replay 2 View System and the Hudl Sideline Premium Package with a focus on the Endzone View differences).

The Hudl Sideline uses a third-party streaming device to capture your camera’s Endzone view and deliver the footage to your iPad. This live streaming device is a Teradek VidiU. Your iPad picks up the WiFi signal and that’s how you see the live-streamed footage from the Endzone View.

The supposed advantage of the Hudl Sideline is that you have the live stream of your Endzone Camera’s view or Pressbox Camera’s view on an iPad. However, the disadvantage is that the live stream is only available on the recorder's iPad. In other words, only one iPad is capable of receiving the live stream and this is usually not the coach's iPad. Rather, a student or assistant is typically the most convenient and practical handler of operating the start and stop record buttons in order to deliver the replay to all the other connected iPads. Therefore, this method of live stream is a bit misleading as an asset and technically not much of an advantage after all.

Also, a big disadvantage is that if you want to record and play back a replay of the previous play, then the iPad is tasked with doing the computational work. That takes time and puts stress on your iPad. Also, because live streaming simultaneously puts so much stress on your network, the download speeds are going to be slow. So when you want to see your replay of the last play, you have to wait longer than what is ideal. If the game is moving fast, it might be too late to review the previous play by the time it’s available. 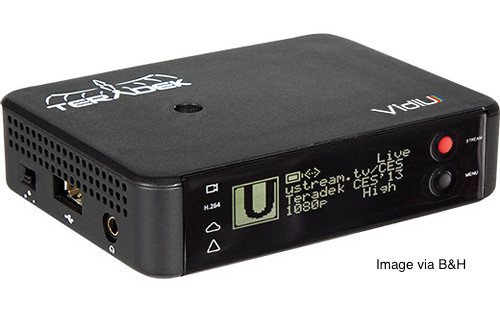 The disadvantage of the EDGE box is that while you do get a Live View on your iPad, the stream is not a high quality stream.

However, this says nothing about what matters: your replay footage, which is absolutely high definition! Not to mention most coaches are fine with watching the current play from the sideline rather than staring at their tablet as it happens. What matters most is the replay after the play is over. This is when the coach needs to analyze both views, slow things down, and make a decision based off of his review. And that’s what the EDGE excels at.

A big advantage for the EDGE Replay is that the Live View is delivered to ALL connected iPads if desired. That means your live footage isn't limited to just the replay operator. The coaches get to see your elevated camera angles too!

Furthermore, the EDGE recorder box does all the computational work of processing your replay, not the iPad. And we store your recordings on the box, so they’re always accessible until you delete them.

Moreover, because EDGE Replay is not required to deliver a high quality, power-intensive live stream and the box was designed from the ground up to do the work of delivering your replay footage (unlike an iPad), the download speeds are substantially faster. A typical play lasting 10 seconds takes the EDGE about 3 to 5 seconds to download. For longer plays that last anwhere from 45 second to 1 minute, EDGE download times are at most 4 to 8 seconds whereas Hudl Sideline download times can take up to 1 second per second of recorded footage. This means if a play is 30 seconds long, your download time could be up to 30 seconds. That’s a long time to wait on the sideline if you're using Hudl, but a huge advantage if you're using EDGE.

As already mentioned, the EDGE box also has an advantage due to its internal memory. Because all recordings are stored on the EDGE box until you delete them, you’re able to recover plays even if your network goes down as long as you've started recording. If you start recording with the Hudl Sideline and the network crashes, that play is gone forever and all subsequent plays being filmed by the camera operators will not be stored until you get the network back online.

And because of that internal memory, you always have a back up of the game film on the EDGE box until you manually delete the files. So unlike Hudl, if you accidentally delete your clips on the iPad before successfully uploading online, you can rest easy because the backups are attainable on the EDGE box.

The Hudl Sideline iPad app has the usual pause, rewind, fast forward, slow down, and scrubbing features that most tablet video players have. You can also draw on the screen for times when you need to visually show your players what they need to see. A separate, free downloadable app allows you to select ODK for each play. Once uploaded, Hudl tries to match the ODK file attained from this separate app to the recorded plays from the main Sideline app.

The EDGE Replay app has all the same video player features but also includes picture in picture. However, the EDGE app also has a diverse and sophisticated tagging app built into the same player. A virtual football field allows you to drag and drop the football to the proper location that coincides with the play on the field. So not only do you get the basic ODK stats attached to each play clip but you also get down and distance and the specific play that had occurred.

The EDGE app uses this tagging data to also provide a number of features. For example, you can view a game stats engine and even your opponent tendencies based on the tagged data.

If we’re talking about differences between Hudl’s software and the EDGE, there are no advantages for the Hudl Sideline.

One big disadvantage is the fact that the in-depth play tagging app is separate from the replay video player app. This means whoever is controlling the tagging app can’t make any mistakes throughout the entire game. If he misses tagging a play then the ODK tags may not correlate with the play clips and you might need to go through the process of correctly lining up your ODK’s and down and distance with the correct plays for every single one the day after the game.

Another disadvantage is the inability to use picture in picture since Hudl Sideline doesn’t have this feature. So while replaying a play, if you want to glance over at your Pressbox view’s angle, then you’re out of luck. You can only see one angle at a time.

Most importantly, Hudl Sideline’s biggest software disadvantage is its lack of in-app sophisticated tagging. As a result, you do not have any of these helpful statistics attached to the plays during the game or after. If you need to tag the entire game after the fact, you’ll have to do it in the film room one by one as usual.

Expectedly, the EDGE Replay does not have any disadvantages in comparison to the Hudl Sideline Software.

As you might have guessed, the advantages of the EDGE are the opposite of the disadvantages of the Hudl Sideline. All the tagging features provided by EDGE are built into the same app that displays the stream of your replay clips. With EDGE you assign your play tags to whichever play clip you want. This means you’ll always have your play tags line up with the correct play clips.

What’s really cool is if you find that a previous play has been mis-tagged you can watch the replay, correct the tags, and then use EDGE’s “Predict” feature to automatically correct the state of the current play so that it can be tagged correctly going forward. Check out the video below for another example of how this advanced feature works and saves you time.

Additional advantages of EDGE’s software are the picture in picture feature and the power of using all of your tagged game statistics live during the game.

The EDGE Replay has the disadvantage in that uploading requires an additional, although simple, extra step in order to upload.

However, it should be noted that the amount of time this extra step requires is usually much less than the amount of time required to fix any tagging errors that you will most likely encounter by using Hudl’s separate tagging app, which requires a manual import anyway. And if you’ve decided you’re going to tag the full game using Hudl Sideline, then you’ll be faced with considerably more work than if you had live tagged the game with EDGE.

To learn how simple the uploading process is for EDGE Replay, watch the video below.

The Hudl Sideline premium package supports two angles from real cameras (not your iPad’s camera). This is done by connecting a Teradek VidiU to each camera angle. The Hudl Sideline software does not currently allow more than two angles.

The EDGE Replay can support as many angles as you want from real cameras (not your iPad’s camera). This is done by connecting an EDGE box to each camera angle. The EDGE Replay software allows for well beyond two camera angles and allows all of them to be downloaded to the iPad simultaneously.

Obviously the disadvantage for the Hudl Sideline premium package is that you’re limited to only two camera angles. Although two angles works fine for most football programs, many are employing a third camera angle from the Pressbox. If you want to get instant replay on the sideline from this third angle and you have Hudl Sideline, then you’re out of luck.

The EDGE Replay has the advantage in that you can connect as many camera angles as you want as long as you have the required hardware to add more angles.

Additionally, it should be noted that the EDGE Replay technology allows for all camera angles to be downloaded to the iPad nearly simultaneously. So once the download is finished and you’re ready to view the replay, you’ll be guaranteed to have access to whichever angle you want to see immediately. No waiting for one angle to download, then the next, and then the next.

The EDGE Replay first year price for the 2-Angle View System hardware and software is $1,999. The annual software renewal fee is $499 for this tier and all other camera angle tiers.

The Hudl Sideline has the advantage in a lower year-one price for all package tiers. Hudl also technically has more package options available, although the viability of filming from an iPad is questionable. However, Hudl’s big disadvantage is in the long term cost. Take a look at the total cost differences after 5 years between EDGE Replay’s two and one angle systems ($1,999 and $1,199) and Hudl Sideline’s equivalent packages ($1500 and $900):

So although the EDGE Replay has a higher price point out of the gate, it’s long term pricing is considerably a greater value. Therefore, the question is would you rather win your exhibition games but not make it out of the playoffs? Or would you rather take a few hits in the early season only to dominate the playoffs at the end of the year? The choice is yours.

If you currently own Hudl Sideline or another replay system and have decided it’s time for a change, check out our Replay Exchange Program now! Under this program, you can send us your replay system and we'll give you the EDGE Replay in exchange at a discounted price. Call (888) 335-7875 for more details or click HERE.